I am in Tennessee, my hometown of Livingston, getting ready for the annual golf tournament to be held tomorrow morning. It is truly amazing to see so many of my friends and family come together, working so hard, to create this event.
This is the 6th annual Hayes Foundation Golf Tourney and I cannot thank all of our volunteers enough for all that they do.
I hope that everyone has a great game!
Kyra
Posted by Kyra Oliver at 12:58 PM No comments:

‘This Side Up’ SIDS-awareness campaign goes to California

We are so proud of our partnership with the Raise Foundation. Special thanks to everyone at Raise, the Hodges Partnership and Richmond Times Dispatch!

Below is what the RTD printed today.

The Hayes Foundation, a Richmond-based nonprofit organization, has formed a partnership with a California group to raise awareness about sudden infant death syndrome and to promote safe sleeping.

The Raise Foundation of California's Orange County will join the Hayes Foundation's "This Side Up" campaign, which includes distribution of infant body suits imprinted with "This Side Up . . . While Sleeping" on the front and additional safe-sleeping tips on the back.

The suits will be distributed to Orange County hospitals, public-health sites and family resource centers, a spokesman for the Hayes Foundation said this week.

The "This Side Up" campaign, started in Virginia in 2006, aims to educate new parents and caregivers that babies are at less of a risk of SIDS if placed on their backs to sleep. The Hayes Foundation has distributed more than 50,000 body suits across Virginia and Tennessee.

Kyra Oliver founded the Hayes Foundation in 2002 after her son, Hayes, died of SIDS at age 4 months. Find out more at HayesFoundation.org.

Posted by Kyra Oliver at 7:25 PM No comments:

Labels: babies, family, Hayes Foundation, Kyra Oliver, onesies, SIDS, Sudden Infant Death Syndrome, the Hodges Partnership, the Raise Foundation. Special thanks to everyone at Raise, This Side Up 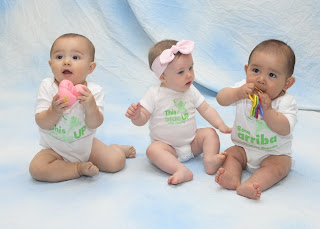 to Increase Awareness of SIDS in Orange County

The Raise Foundation will implement The Hayes Foundation’s This Side Up campaign, an educational effort that reminds anyone who looks after a baby (parents, grandparents, siblings and daycare providers) that babies are at less of a risk of SIDS if placed on their backs at nap or bed time. It will distribute the campaign’s educational onesies – which read “This Side Up…While Sleeping” on the front and offer additional safe-sleeping tips on the back – to Orange County’s area hospitals, public health sites and Family Resource Centers. The Raise Foundation also will serve as the This Side Up campaign’s exclusive partner for distribution to other California counties, hospitals or organizations.


“The onesies are a quick and ever-present reminder of a topic that many parents and caregivers are uncomfortable with,” said Russell Brammer, executive director of The Raise Foundation. “They are a way to start the conversation about SIDS and safe-sleeping habits for babies. It’s our hope that our neighboring counties will find this cause as important as we do.”


Added Kyra Oliver, who founded The Hayes Foundation days after her son Hayes died of SIDS at 4½ months: “We are overwhelmed that The Raise Foundation is willing to help us spread our message and raise awareness of SIDS. Our vision is to create a world without SIDS, and this partnership will take us one step closer to that goal.”

In 1998, The Raise Foundation introduced “A Guide for New Parents,” a nearly 500-page book that provides tips and instructions on raising a baby. While the guide is given free to about 600 parents annually in Orange County, the goal is to distribute it to every parent in the county.

“We see the This Side Up campaign as the perfect complement to what we are doing with the parenting guides,” Brammer said. “Most forms of child abuse and neglect can be prevented through education, and we think the same for SIDS and other infant deaths related to sleeping and sleeping conditions.”

About 2,500 families in the United States lose a baby to SIDS each year. That’s about half as many deaths related to SIDS as in 1994 when the national Back to Sleep campaign was introduced. The Hayes Foundation introduced the This Side Up campaign in 2006 as an extension of Back to Sleep with the goal of putting a tangible reminder in the hands of those who look after babies. The Hayes Foundation has distributed more than 50,000 onesies in more than 20 hospitals in Virginia and Tennessee and through Virginia Gov. Timothy M. Kaine’s Smart Beginnings Initiative.

“SIDS continues to puzzle the medical community,” Oliver said. “While it’s not possible to prevent SIDS, research has proven there are factors that can reduce the risk of SIDS. That’s what our campaign is about.”

Oliver’s son Hayes was sleeping on his stomach while at daycare when she got a phone call that he wasn’t breathing. Just as she was getting to know her son, he was gone. In the days following his death, she started The Hayes Foundation in his honor. Since its founding in 2002, the foundation has raised more than $500,000 for SIDS awareness and education.

About The Raise Foundation
The Raise Foundation is Orange County’s Child Abuse Prevention Council as officially designated by the Orange County Board of Supervisors in 1974.  We became incorporated as a private nonprofit 501(c)3 agency in 1987.  Our Mission is to stop the cycle of child abuse through leadership, education, advocacy, community collaboration, comprehensive services and through our role as Orange County’s officially designated Child Abuse Prevention Council.  Our Vision: The elimination of child abuse in Orange County.

We fulfill our Mission by attacking the problem of child abuse through a multidimensional strategy, recognizing that no single approach and no single agency can solve this problem alone.  Our strategy includes providing direct services to at-risk families in order to give parents more tools to cope with the challenges of parenting and the stresses of life.  We collaborate with other agencies and organizations in programs to prevent child abuse to minimize duplication of services and maximize use of limited resources.  We convene the Prevent Child Abuse Network each month. This Network is comprised of agencies, organizations, businesses, and individuals who are committed to eliminating child abuse in Orange County.  We conduct public awareness campaigns like our campaign to increase knowledge of the Safe Surrender Law.  We provide the public with educational forums, such as our annual Child Abuse Prevention and Treatment Conference.  Through our Parent Education Program, “Helping Parents Raise Happy Families,” we provide parents with the tools they need to parent their children safely and effectively in times of stress and frustration.  For more information, visit www.theraisefoundation.org <http://www.theraisefoundation.org/> .

About The Hayes Foundation
The Hayes Foundation is a nonprofit organization that was started in 2002 by Kyra Oliver days after her 4½-month-old son Hayes died of SIDS. The foundation, based in Richmond, Va., has raised more than $500,000 for SIDS education and research and has helped raise awareness of SIDS prevention among thousands of families. Its This Side Up campaign launched in March 2006 to educate parents and anyone who cares for a baby that the safest way for babies to sleep is on their backs. For more information, visit www.hayesfoundation.org <http://www.hayesfoundation.org/> and www.thissideupcampaign.org <http://www.thissideupcampaign.org/> .