Thanks to the Richmond Times Dispatch for including our Commentary in the Sunday paper. We hope to help others by sharing information when we get it.

"What makes SIDS all the more maddening is that it knows no cure: The first symptom is death.
SIDS doesn't discriminate, robbing parents from all walks of life of their bundles of joy as they are just getting to know them. While SIDS occurs more in lower-income families, Los Angeles Lakers star Lamar Odom lost a son to SIDS in 2006, and Tampa Bay Buccaneers kicker Matt Bryant's son died several weeks ago unexpectedly, most likely of SIDS (the cause of death has yet to be determined)."

It doesn't matter who you are. You should be aware so that it doesn't happen to you and your family.
Posted by Kyra Oliver at 1:21 PM No comments:

Reducing the Risk: Fans and SIDS

A recent study revealed that putting a fan in your baby’s room might reduce the risk of SIDS by 72 percent. What’s more, Newsweek reported of another study by the journal Pediatrics that 25 percent of parents of 3-month-olds still aren’t following the recommendation that babies sleep on their backs. The majority of SIDS deaths occur when a baby is 2 to 4 months old.

This number is alarmingly high – in light of the fact that “Back to Sleep” has been suggested since 1994 – and is exactly why we believe there needs to be more education and why we started the This Side Up campaign. If 25 percent of parents don’t know babies are safest from SIDS when sleeping on their backs, wouldn’t you expect the number to be much higher for grandparents? Baby sitters? Daycare providers?
Posted by Kyra Oliver at 6:11 PM No comments:

Labels: back to sleep, fans, SIDS

October is SIDS Awareness Month. I was excited to hear about the Style My Stroller Campaign – an effort by the CJ Foundation for SIDS to raise awareness of SIDS.

Maclaren donated strollers, which were designed by Angie Harmon (who is expecting her third child), Tori Spelling (who welcomed her second baby in June), Ashlee Simpson and Marissa Jaret Winokur and auctioned off from Oct. 6-13. We’re still waiting to see the finished designs and hear about how much was raised.
Posted by Kyra Oliver at 5:59 PM 2 comments: 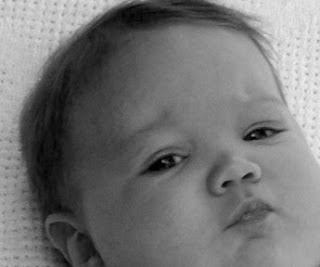 In memory of my son, Hayes Hitzeman, I envision a future in which no parent loses a child to SIDS - Sudden Infant Death Syndrome.

I began the Hayes Foundation in 2002 days after Hayes' untimely and heartbreaking passing with the goal of raising awareness of SIDS and helping to further research so that we all might understand how to help prevent babies dying from this unexplained disease. One of the Hayes Foundation's major efforts is the This Side Up campaign, which is helping to distribute educational baby garments in hospitals across Virginia and Tennessee so that parents and caregivers will understand that the safest way for a baby to sleep is on his back.

As I begin this blog, though, I invite you to come back often for updates on SIDS research, the This Side Up campaign, and most importantly, to help create a community where we can spread the word about ways to reduce the risk of SIDS.
Posted by Kyra Oliver at 5:04 PM 2 comments: